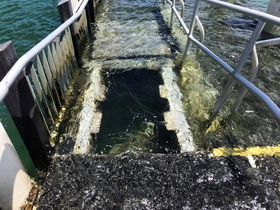 An unexpected collapse of decking to a section of Bundeena wharf saw a local child suffer a serious injury to her leg.

Bundeena NSW Fire & Rescue staff arrived on the scene and attended to the girl before being handed over to NSW Ambulance and taken to hospital. The injury was a deep cut to the lower leg and required surgery.

The section is normally used by the ferry at low tide but is underwater as the tide rises. The girl had been swimming in the area and had climbed on to the wharf and was walking along the platform when she fell through the missing decking.

The impacted section of the wharf was taped off to warn other members of the public. Cronulla Ferries was made aware of the wharf issue and was to able adjust for passenger embarking and disembarking. Council was also notified and has planned to remediate the affected section.