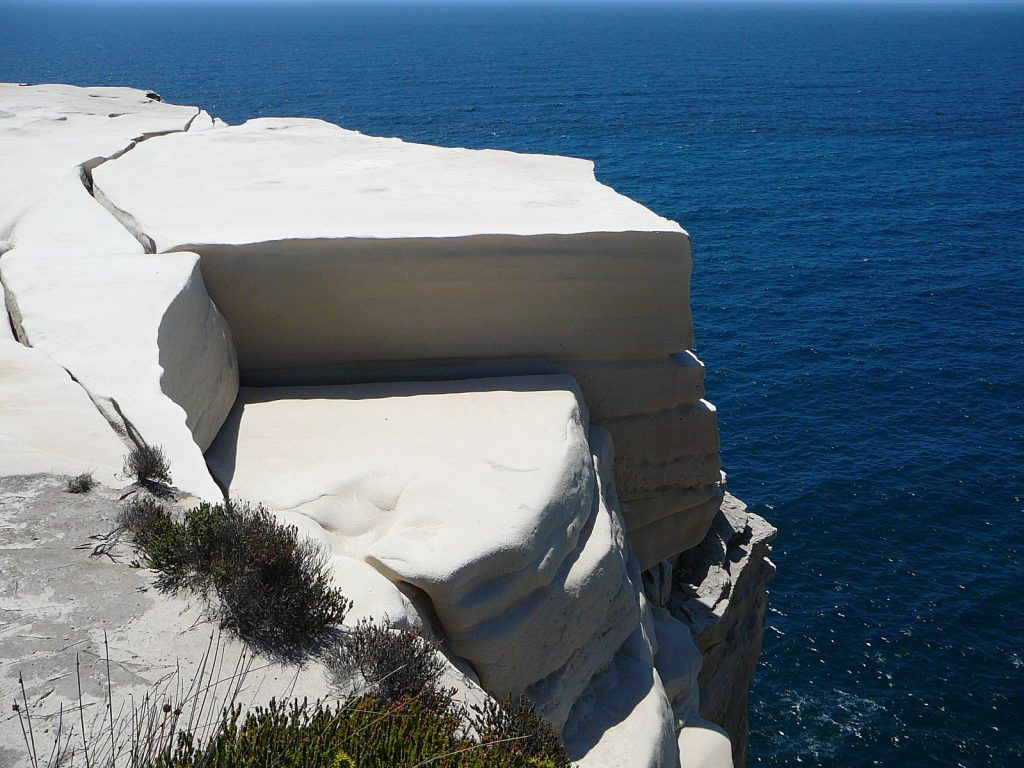 Wedding Cake Rock bushwalk is located in the Royal National Park and is a stunning white rock cliff which has been formed over thousands of years.

The track entrance to Wedding Cake Rock bushwalk is located near the intersection of Beachcomber Ave and Eric St.  While there is limited parking at the entrance location there is free street parking along the surrounding streets though one should be careful to avoid parking in front of residential driveways.

Slightly past the entrance point information signs there is a water refill station along with toilet facilities. About a hundred metres into the start of the track it forks into three separate paths. The first path is the Jibbon Track which leads to an extensive colloection of Aboriginal rock engravings. The second path is the Coast Track and is the one to take as it leads you to Wedding Cake Rock. Further on there is a third path which leads to a disused track and takes you to Big Marley Fire Trail.

The track has a number of points of interests along the way. After walking towards the coast for about a kilometre you will reach The Balconies which is the first of many highlights. The rocky but flat section of coastal cliff provides great viewing sightlines for whale watching. On Boxing Day the yachts competing in the renowed Sydney to Hobart sailing race can been seen from this vantage point about an hour after the start.

Before heading south down the main track you can view a cave lookout formed in the inside of a cliff.  Walk north along the cliff edge for about a hundred metres which will lead you to a cliff peak. On the southern side of the peak is the lookout which you can climb down to. See highlighted photo in the above photo gallery.

Continuing south from The Balconies for about 1.5km you will cross The Waterrun.  A steep staircase leads you down to a series of large sandstone blocks which allow you to cross The Waterrun before climbing back up again. There are a series of rockshelves here which make for a good photo opportunity.

Heading south from The Waterrun for just over half a kilometer will take you to Wedding Cake Rock. The Rock itself is fenced off for safety reasons and should not be stood on. Scientists have predicted the shelf which makes up  Wedding Cake Rock is expected to collapase into the sea within the next decade. Several tourists have also met a tragic fate by getting to close to the edge.