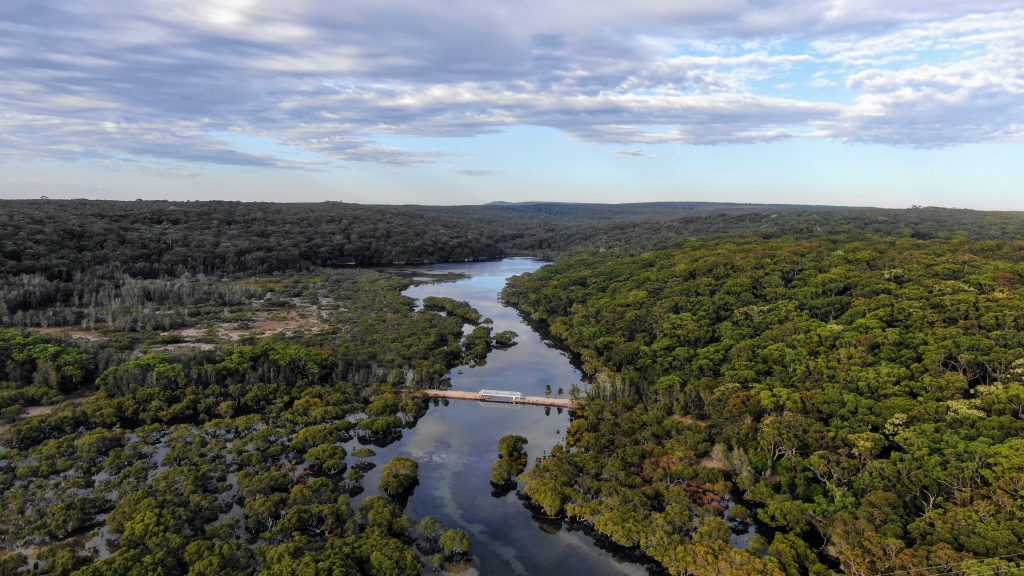 Access to the Cabbage Tree Basin bushwalk is through Bonnie Vale Beach located in the Royal National Park. The entrance is located on Sea Breeze Lane which runs off Bundeena Drive as you enter the town.

As an alternative the Basin can also be reached by kayak at high tide.  Kayaks can be launched from Bonnie Vale beach and then paddling through Deeban Spit and on to the waterway leading to the Basin.  Allow about two hours for a return paddle and take note of the tide times so you can plan your entry and exit to minimise the effort required.

Following from the Bonnie Vale entrance the road enters the picnic area with views of Simpson Bay. Along the way there are a number of historical cabins which date as far back as to the 1930s. During the 1950s, in it's peak, Bonnie Vale had almost two hundred cabins forming a community of weekenders as well as permanent and semi-permanent residents.

The road ends at the westerly end of Bonnie Vale and is where the bush track to Cabbage Tree Basin bushwalk continues. The track has a lush array of vegetation and foliage.

The track continues on where it meets a metal bridge which also carries the towns main water pipeline. From the bridge there are fantastic water views to both to the south encompassing Cabbage Tree Basin as well as to the north looking towards mangroves and Deeban Spit. Many varieties of bird life can be spotted at times including herons, cormorants and pelicans.

About 50 metres past the bridge a bush track heads south following the perimeter of the Basin. Following the track for a kilometre leads you to a cliff outcrop which gives great views of the southern end of the Basin.

Cabbage Tree Basin was, in fact, the site of Australia's first marine fish hatchery which was established in 1900 and contained a number of fish pens, holding both native and introduced species of fish which were then released into the adjoining waters of Port Hacking. By 1901, the hatchery reportedly contained snapper, black bream, garfish, whiting, Tasmanian trumpeter, herrings, lobsters and oysters, and, produced millions of fry. In 1914 a mysterious epidemic resulted in the sudden death of all the fish contained in the Basin which resulted in the closure of the hatchery.

One can follow back the path from the cliff back to return to the starting point but for the more adventurous one can continue heading south to circumnavigate the whole Basin perimeter. Some bush bashing and a small river crossing is required for this portion.

A kilometre northeast of the river crossing you will come across an Aboriginal midden scattered with shells. During the sixties an archaeological dig in Cabbage Tree Basin uncovered the extensive open-air midden. Successive layers of habitation showed the diet of the native Aborigines which included oysters, mussels, snapper, bream, and Sydney cockle. Several edge-ground axes were also found.

Continuing on in a northerly direction will take you into a thick array of mangroves. When the tide is low it can be easily entered and you can see large swarms of soldier crabs in the moist terrain. The path eventually joins up with the main bush track which will lead you back to the starting point.