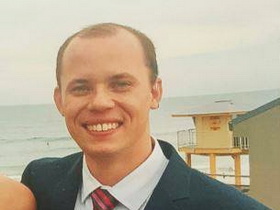 The ground search concludes for Aaron Payne, 32, who has been missing since Saturday.

Mr Payne who parked his car on Beachcomber Ave in Bundeena entered the Royal National Park on Saturday.

A high school support teacher, who works in the Sutherland Shire, he had an interest in frogs which is suspected why he set out on the bushwalk. There are lagoons at Jibbon headland and nearby Marley beach which are known to attract frogs.

Mr. Payne also wears a hearing aid which may not be functional at this stage and could be hampering search efforts to locate him.

The fifth day of the search saw crews from the SES, RFS and NSW Police have to fend off gusty winds of up to 40km/h. Service vehicles were located along Big Marley fire trail as well as the depot area bordering Spring Gully. A special truck had also been positioned on the trail to aid in remote communications as the area is a blackspot for normal mobile telephone signals.

Multiple Police helicopters were also spotted scouring Marley Lagoon as well as south to Wattamolla beach. The Westpac lifesaver rescue helicopter had done an extensive aerial of the Royal National Park on Tuesday however, on Wednesday it was diverted to Kincumber to aid in the search of a little girl who was eventually found.

NSW Police made the decision to conclude the ground search after 5 days however the Marine Area Command will continue to search the along the coastline.