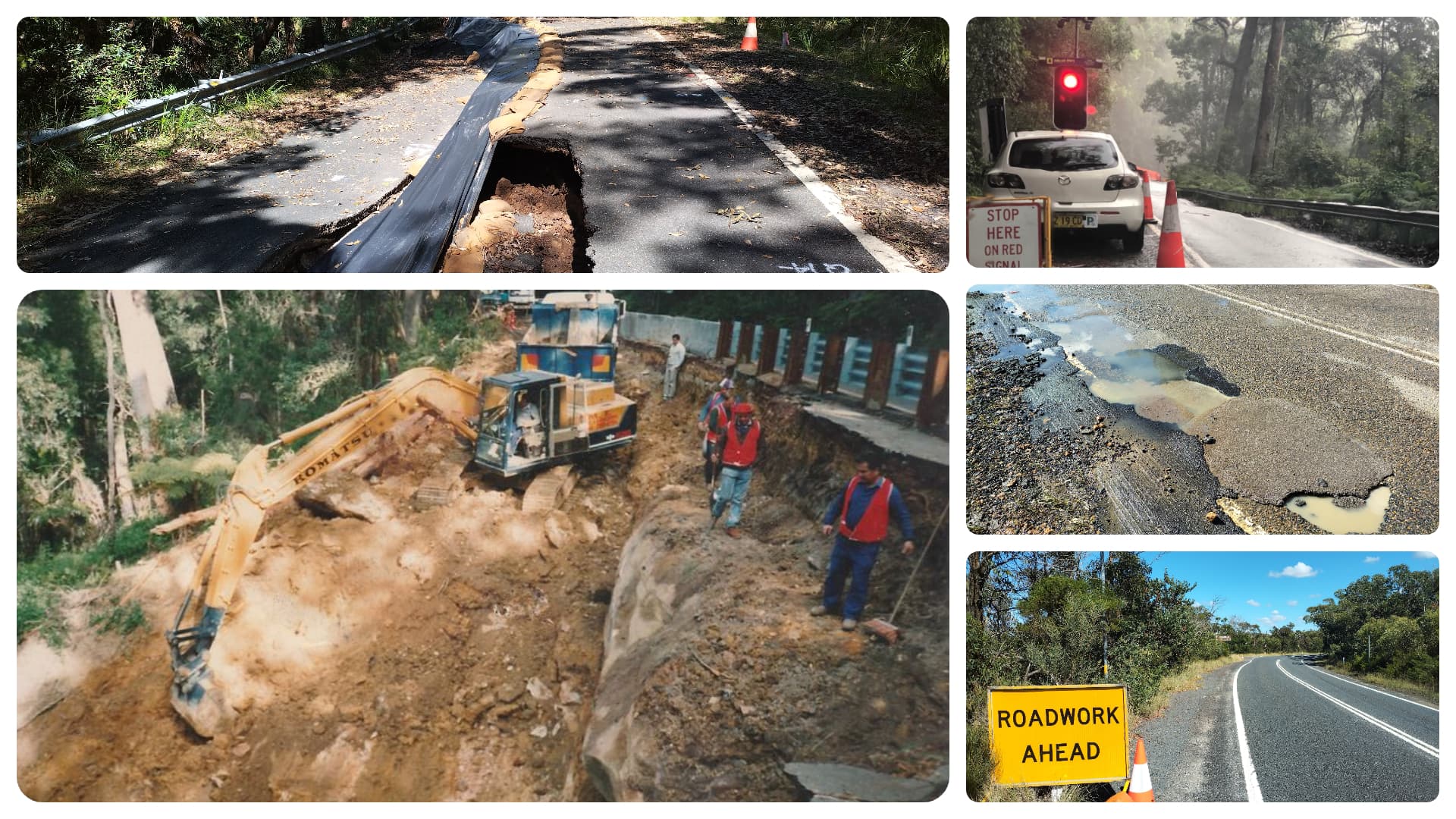 Unprecedented  rainfalls have caused serious damage to many of the roads in the Royal National Park.

The most notable impact to the Royal National Park of this record rainfall has been the flooding of Audley Weir.  In the first four months of 2022 the weir has already been closed for 31 days with one closure stretching to 17 days alone.  This dwarfs the average annual closure rate due to flooding of 7 days per year which has been observed over the last ten years.

The other notable impact to the Royal National Park has been the extensive damage to the roads. These include the roads to high profile visitor areas of Wattamolla and Garie Beach as well as McKell Ave which serves as the secondary access road to the Park. 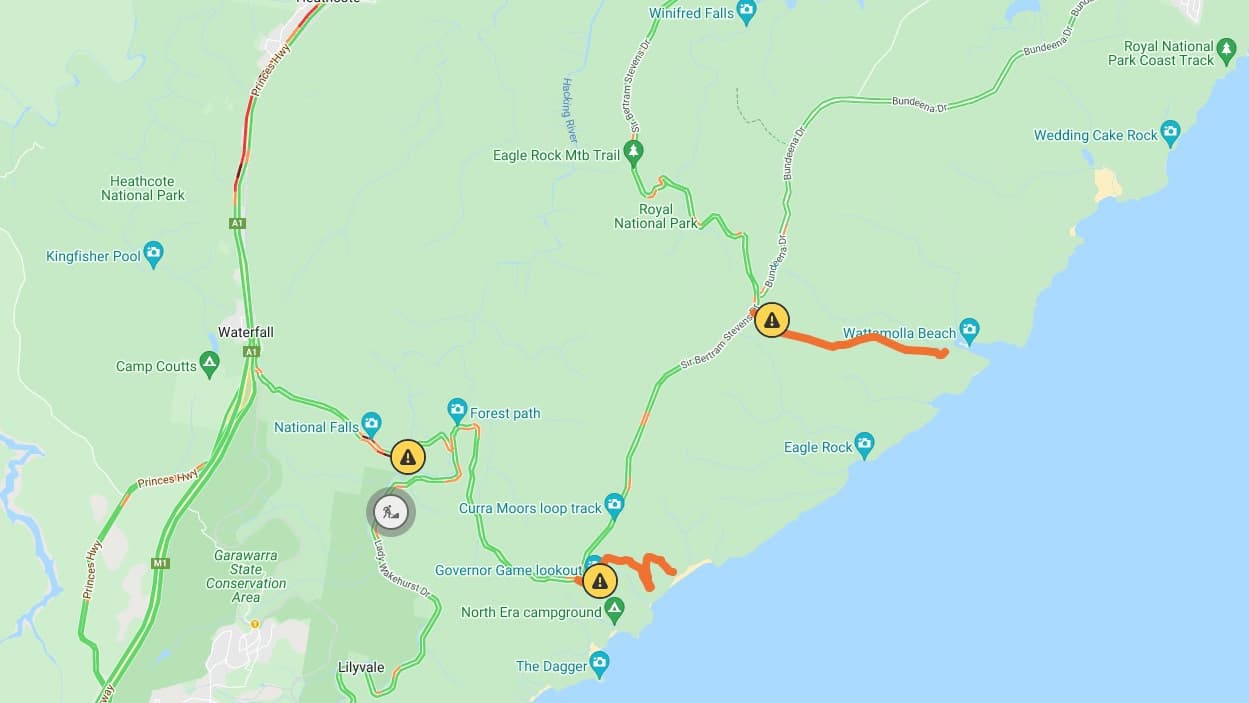 Other roads in the Park have also been impacted to a lesser extent by large potholes but have still inconvenienced visitors and residents alike.  The potholes have caused many flat tyres as well as damaged wheel rims. In some cases the rims have been a write-off resulting in a hefty bills for owners.

There are two sets of roads in the Royal National Park. One set is maintained by Sutherland Shire Council such as Bundeena Drive and Maianbar Road. The other set are NSW state roads and are maintained by Transport for NSW (TfNSW). Both authorities have been proactive in patching the potholes but with ongoing rains temporary fixes need to be reapplied making it a constant battle to keep on top of things.

McKell Ave starts at Waterfall train station and provides entry in to the Royal National Park. It is less used than the Farnell Ave which is the primary entry located at the northern section of the Park. However, when Audley Weir becomes flooded McKell Ave becomes the primary road for access to the Park along with Bundeena and Maianbar.

On the afternoon of 4 March McKell Ave was closed off in both directions due to a landslip located between National Falls and Joan Holland bridge. A southbound section of the road shoulder had sheared off making it unstable and a traffic hazard for vehicles travelling past it.

Audley Weir was already closed resulting in Lady Wakehurst Drive at Otford becoming the sole vehicle entrance into the Royal National Park. For residents of Bundeena Maianbar this meant a 30 minute diversion from the normal driving time to Sutherland.

Fortunately,  after two days McKell Ave was reopened albeit with single lane access. For several days human traffic controllers managed northbound and southbound access to the single lane through heavy rains both day and night until automated traffic lights could be sourced.

Barriers have been put in place until the road shoulder can be reconstructed but no time frame has been given when remediation works can commence.

Garie Road provides access to Garie Beach which is popular with day trippers as well as surfers. The Garie Road entrance from Sir Bertram Stevens Drive is 200 metres above sea level and is steep 3 km descent to Garie Beach carpark below. On 26 March Garie Road experienced cracking causing the road to subside about 600 metres from the carpark entrance.

The one metre deep collapse of the road runs about a 100 metres and primarily affects the lane running from the carpark. However, the opposite lane has a section with a significant crater which would make single lane access not viable.

It is envisaged that the road may remain closed for some time to enable extensive repairs to be undertaken. A reopening date is not currently known.

Wattamolla Road provides access to Wattamolla Beach and Precinct and  is popular with picnickers and beachgoers. In summer months the parking lot often fills out with keen visitors prepared to walk the 3.5 km road to access the area.

On 2 April a rock fall caused Wattamolla Road to close. The damage and obstruction to the road has made it impassable. As a result Wattamolla Precinct is now closed only a couple of months after having major upgrade completed.  However, passage through Wattamolla via The Coast Track is still permitted.

Barriers have been put in place until the road shoulder can be reconstructed but no time frame has been given when remediation works can commence.

Geotechnical assessments have yet to been made but it is expected the area will re-open when it is safe to do so.

Extended road closures are not uncommon in the Royal National Park.  The most significant closure dates back to 1991 when one of the lanes collapsed along Sir Bertram Stevens Drive between the Garie Road turnoff and Joan Holland Bridge.

Both lanes were closed for six weeks while geotechnical assessments were made. Eventually, traffic was opened to one lane while repairs were completed over the next eight months. 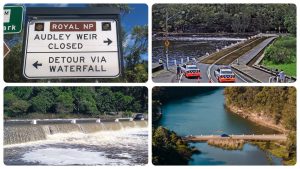