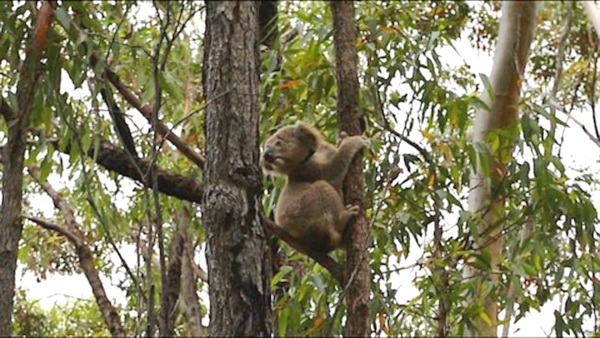 A special presentation on the potential for the Royal National Park to be a koala refuge took place in Bundeena 1 June 2021.

In August 2020 a koala was found in a suburban street in Kirrawee and was released into the Royal National Park. Why haven’t we seen more koalas in the Royal National Park? Some of the reasons revealed in this information session by various experts centered around over development, climate change and the lack of natural access corridors for Koalas to enter the Royal.

The presentation was also a launch for the film funding campaign of a new documentary film. The film titled The Koala Corridor is about Sydney’s last healthy wild koala colony located in southwest Sydney. Local filmmakers Gregory Miller and Georgia Wallace-Crabbe presented a trailer for the film (a work in progress), which looks at the last healthy koala population in the Sydney region, and how koalas are on the move eastward from the Campbelltown area towards the Royal National Park. It is likely more koalas will make their way here in the years to come but they face many obstacles on the way.

It has been predicted that koalas will be extinct in the wild by 2050. Could the Royal National Park be a koala refuge? Is it suitable habitat for koalas? A lot will depend on how we address the key factors of over development, climate change and the lack of natural access corridors.

Gary Jubelin gives a talk about his career and his life post-policing.