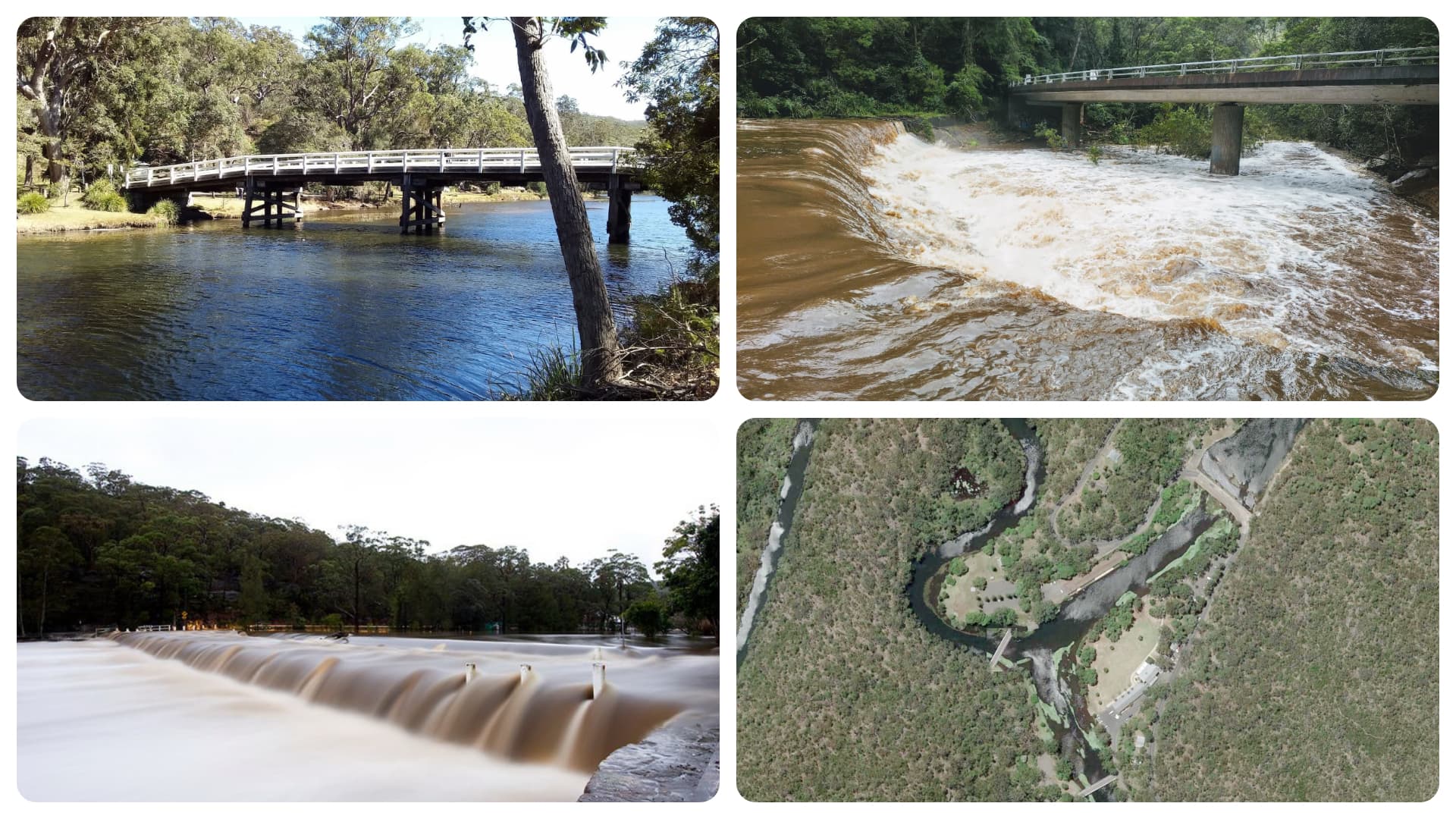 A bypass bridge proposal could address road closure concerns caused by the flooding of Audley Weir.

With the La Nina weather event in 2022, Audley Weir has already had 5 flooding events in the first three months and has been closed to traffic for more than 25 days.

Why isn’t there already a bridge at Audley Weir?

Audley Weir isn’t the only road in the Royal National Park that floods.  The Upper Causeway located underneath the Joan Holland bridge at the intersection of McKell Ave and Sir Bertram Stevens Drive regularly floods in tandem with Audley Weir.

Before the Joan Holland bridge was opened in 1993 road access to Bundeena and Maianbar was only possible via Otford when both Audley Weir and  the Upper Causeway flooded. Pre 1993, Bundeena resident Joan Holland led a campaign for alternate road access during flooding.  At the time, the preference of residents was for a bridge solution at Audley Weir which would minimise commuting time.

However, in the end the decision was made to build a bridge at the Upper Causeway. Two factors appear to have driven this decision. The first was to maintain the heritage character of the Audley Weir precinct which dates back to the 1800s. It was thought the addition of a bridge would impose on the character of the area and be a possible eyesore.

The other factor was the road engineering complexity and cost required to build a bridge over Audley Weir. Audley Weir is located in a deep valley which starts at the northern end of Audley Road and extends near to the intersection of the Sir Bertram Stevens Drive and Warumbul  Road. Creating a bridge which would span this valley would be a major undertaking. A simpler bridge directly over the weir or the raising of the weir may not be structurally sound as well as impact on the heritage factor.

These two factors were expressed by NSW Roads and Maritime Services in a letter to the Bundeena Progress Association in May 2017:

Roads and Maritime has considered raising the Weir or constructing a downstream bridge to alleviate flooding, however, economic analysis carried out revealed the costs for these works would far exceed the benefits to motorists and the options were not supported. Additionally, any height modification to the Weir itself would have adverse impacts on the Audley Historic Recreational Complex which is listed on the NSW State Heritage Register.

An option which could address concerns over heritage and cost factors is to create a separate bypass bridge over Kangaroo Creek.  Access to the bypass bridge would be via the existing entrance road to Audley Boatshed. The entrance road ends at a parking lot which borders the creek.

The bypass  bridge solution would be sympathetic to the existing heritage character of the Audley precinct and provide a low cost solution. To minimise traffic flows during normal times the bypass bridge could be limited for use only when the weir floods.  If desired the costs could be further minimised by disallowing use for heavy trucks.