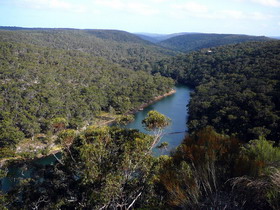 A third homeless person living in the Royal National Park is currently being rehoused through a unique joint initiative.

National Parks and Wildlife Service and Centrelink united last July to replace the traditional hardline taken against homelessness with a proactive outreach program.

Royal National Park Area Manager Michael Treanor said: “The old approach of sticking a note on the tent giving them two weeks to get out was not effective, the new approach is showing signs of success.”

A police helicopter equipped with an infrared camera identified 40 temporary campsites throughout the Royal National Park during the initial stages of the initiative. Approximately 30 of the camps are inhabited Mr Treanor said.

Many of the camps are well equipped. Some house generators, gas cookers and showers. Mr Treanor said: “The most impressive thing I’ve seen has been a three bedroom house build into a cave at Heathcote that was occupied for two years.”

The initiative works with welfare organisations, government departments and local police to develop sustainable solutions for the homeless. It aims to provide long-term, secure accommodation in government facilities.

The program evaluates individual circumstances and provides options, with crisis accommodation, counselling for drug and alcohol issues and care for those suffering mental illness available.

The initiative is unique within the National Parks and Wildlife Service and has been positively received by upper management. Those involved hope to share the program with other national parks.

Most homeless people in the Royal National Park are middle-aged men suffering from mental health, drug and alcohol or family issues. Many of the men are also believed to be avoiding the law. Currently there are no public facilities for single homeless men in the Sutherland Shire.

Sutherland Shire Councillor and Baptist Reverend George Capsis said: “Homelessness is an underground problem in The Shire.” Mr Capsis founded Community Outreach Ministries, a non-denominational charity that provides three private homeless shelters in the Sutherland Shire. The shelters have taken in two homeless people from the Royal National Park in the past Mr Capsis said.

Bushfire risk, regular control burns and disturbance to visitors are the main concerns involving homeless people living in the Royal National Park. Park protocol states that homeless people must be left alone unless they a danger to themselves, others or the environment.

Representative of Homelessness NSW Digby Hughes said: “We need to talk to these homeless people, we need to know why they are there.” He identified the NSW Homelessness Action Plan enacted in 2009 by the Rudd Government as a very positive change to the status of homeless people and strategies to support them.

Bundeena resident of 32 years Janell Rogers was unaware of homeless people currently seeking refuge in the Royal National Park.  Ms Rogers said: “I would rather see homeless living in a pleasant environment like a national park than on the streets of Kings Cross… I don’t think building permanent dwellings in the park is acceptable when others have to obey the rules.”

Historically the Royal National Park has been a haven for the homeless. During the Great Depression rock overhangs, caves and shanty dwellings were home to hundreds of people.