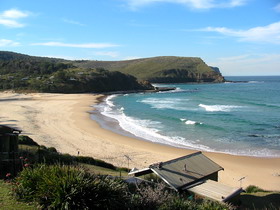 Resident’s of Bundeena Maianbar’s unofficial neighbouring cabin community to the south located in the Royal National Park will be allowed to stay under a special deal.

Over two hundred cabins dot the coast around North & South Era beaches located in the lower south east coastal area of the Royal National Park. The cabins were built and used during the early 1920s through to the depression years of the 1930s. Out of work men supported their families catching fish, rabbits and growing vegetables. The cabins had been built with permission on privately owned land which, in 1950, reverted back to the NSW Government and became part of the National Park. As a result of their historical significance the cabins were heritage listed.

As of mid December 120 owners signed new five year leases with the Department of Environment and Conservation to maintain access and use of the cabins. The leases start April 1st 2007 and will have three five year renewal options. The department is also hoping to extend the license to another 100 cabins which currently have not signed on. The original lease offer was turned down by the cabin owners but a new lease offer came after mediation between department and the Royal National Park Coastal Protection League.

On a related note National Parks and Wildlife Service is also looking to have short-term letting of some of the cabins for use by the public.