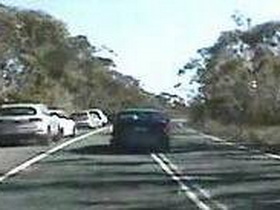 A drunken speedster is apprehended in the Royal National Park over the long weekend.

At 2.25pm on Monday 1st October, 2018 Police were patrolling the Royal National Park due to over crowding issues being the Labour Day holiday.  During this time police detected a BMW sedan South upon Sir Bertram Stevens Dr approaching Curra Moors walking track.

When police were attempting to stop the vehicle it was noticed the driver was allegedly swerving across the roadway at one stage over unbroken separation lines into oncoming traffic.

When stopped, other motorists stopped near police and complained about the manner of driving of the BMW.

Police could see that the driver was allegedly seriously impaired by alcohol, not being able to stand or walk properly, speak or answer questions properly or follow instructions.

The driver, a 45 year old male from Kareem’s, returned a positive roadside reading and was conveyed to Sutherland where a breath analysis returned a reading of .225.

The driver was charged with High Range PCA and Exceed speed over 30 KP/H to appear at Sutherland Local Court on 1st November, 2018. Drivers licence suspended on the spot.