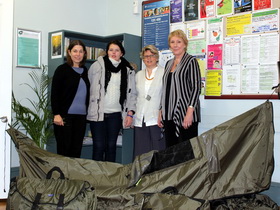 A small group of women in Maianbar held a Winter Warmers Festival in early July 2011 and raised an astounding $4,600 by selling hand-crafted warm items to their neighbours in Maianbar and Bundeena.

The funds raised were used this to buy Backpack Beds for the Haymarket Foundation in Darlinghurst, to hand out to its clients – those who sleep rough on Sydney’s streets for an infinite variety of reasons.

Two representatives of the Maianbar group, Fi Shewring and Joan Morris, handed 44 of the Backpack Beds to the foundation on Friday, July 22. They were overwhelmed by the scope of the foundation’s services to the underprivileged, and then delivered more to the Shire Community Services in Sutherland, for distribution to those who need them in the Sutherland Shire. 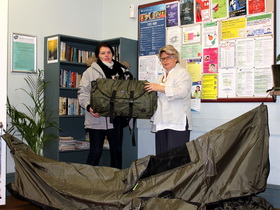 Swag recipient and Maianbar Winter Warmers representative Fi Shewring, with some swags.“To see the pleasure on the faces of those in the foundation’s drop-in centre when they were handed the Backpack Beds really made it all worthwhile,” Fi Shewring said. “We could see first-hand the results of our efforts.”

It didn’t take long before two recipients were the first to be given the Backpack Beds at the Haymarket Foundation, followed quickly by three more surprised and delighted ones.

The foundation’s chief executive officer, Kay Elson, said the only criterion for handing out the beds was that the recipient was sleeping rough. “There are plenty of them,” she said. “We’re very grateful for your generosity in making them available to us.”
The beds are Australian-designed and made foldaway swags that can quickly be turned into backpacks with their own security pockets, insect netting, mattress and windbreak.

They have won an international design award and several Australian ones, the most recent in the 2011 Australian International Design Awards announced in Melbourne on July 22.

In addition, an exhibition at Sydney’s Powerhouse Museum will feature the Backpack Beds for the next 12 months. 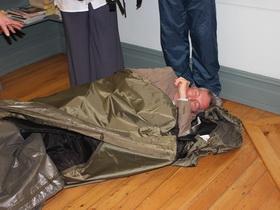 The Maianbar community hall was packed before an hour was up on festival day, and hand-crafted items were flowing out the door. Hundreds of hats, shawls, beanies, gloves – with and without fingers – scarves, capes, bedsocks and slippers, exotic pincushions, tea-cosies, native-animal door snakes and cuddly toys were snapped up by those who were wise enough to come early, a lesson learned from last year when many of the one-off items were already marked as sold early in the day.

This was the community’s third Winter Warmers Festival, each time the money raised going to help the city’s homeless. The total this year was more than twice that raised in 2010, when it was directed to OzHarvest, an organisation rescuing surplus food from cafes, restaurants, bakeries and fruiterers to feed the hungry, homeless and needy in Sydney, Wollongong and Canberra.

For information on the Backpack Beds visit www.swags.org.au