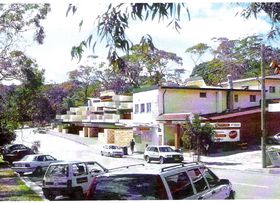 The LEP hearing for the corner store development is set to take place on the site at 9:30am on August 3rd and 4th.

Residents who objected to the corner store site plans have recieved notice of the hearing from Pike Pike & Fenwick the legal representatives of Sutherland Shire Council.

As reported previously on BundeenaInfo the scheduled LEP hearing in April had been cancelled as a consequence of the developers Mars decision to submit these new plans.

The ammended plans now reduces the floor space and proposes only 2 shops and 9 units. The original plans submitted in August 2005 had originally called for 4 shops, 11 units and a basement carpark for 28 vehicles. In December 2005 the plans had reduced the number of shops to 3 and units to 10 but had increased the parking to 34 vehicles.

Some residents had objected to the plans due to the presence of the units on what is zoned as a commercial area. Opinions are mixed on the number of shops being proposed with some saying there are too few while others argue there are too many given the financial viablity of such business in the area. It’s expected that the one to one building to land ratio will be argued for by the developers and that Council may push for a 50/50 mix between commerical and residential use.