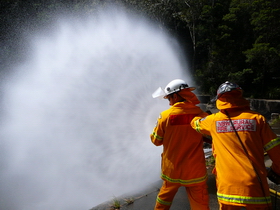 See our local Bush Fire Brigade in action as we tag along on one of their fire fighting exercises.

You’ve probabily have passed by thousands of times but may have not noticed that across from Bundeena Service Station there are not one but two firestations in town. One is Station 80 which houses the NSW Fire Brigade who’s main role is to deal with property related fires in town. The other is Station 23 which houses the Bundeena Bush Fire Brigade and operates under the umbrella of  the NSW Rural Fire Service.

The  Bush Fire Brigade’s main role is targetted at fighting bush fires in the Royal National Park with the goal of preventing them from reaching the towns of Bundeena and Maianbar. Being part of a state wide group they may also be called upon to fight fires in other parts of NSW. Moreover, they are also called on to deal with medical emergencies as well as car accidents in the Royal like the recent one at The Saddle.

Amazingly the dedicated group of members who makeup the Bush Fire Brigade sacrifice their time and risk their lives all on a voluntary basis! Many have a strong sense of community and some like Captain Ian Nightingale have been long serving members. In Ian’s case he’s served thirty years and was involved in both the big fires of 1994 and 2001.  The other attraction is the sense of adventure the brigade offers as well as being able to hangout with a very sociable and likeable lot.

We were invited to see them in action at a training exercise in the Royal National Park. The brigade was called out from Bundeena and two firetrucks raced to the entrance of the Curra Moors track. A simulated fire was burning over and area of 300 metres alongside a smaller one of 10 metres. The crews had to quickly setup the hoses and position themselves as there was no time for mucking about.

Then into the bush dousing the fire as they headed deep into the track. The recent new hoses allowed them to vary the rate of water pressure resulting in using only a fraction of the water on the onboard tanks than normal. Several checks that the fire had been put out had confirmed that a potential  disaster had been avoided. 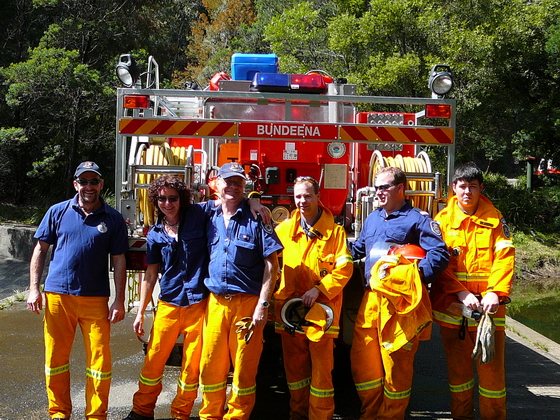 You can see the Bush Fire Brigade in action as well and find out how you can join at their Open Day on Saturday October 6th. Details Here