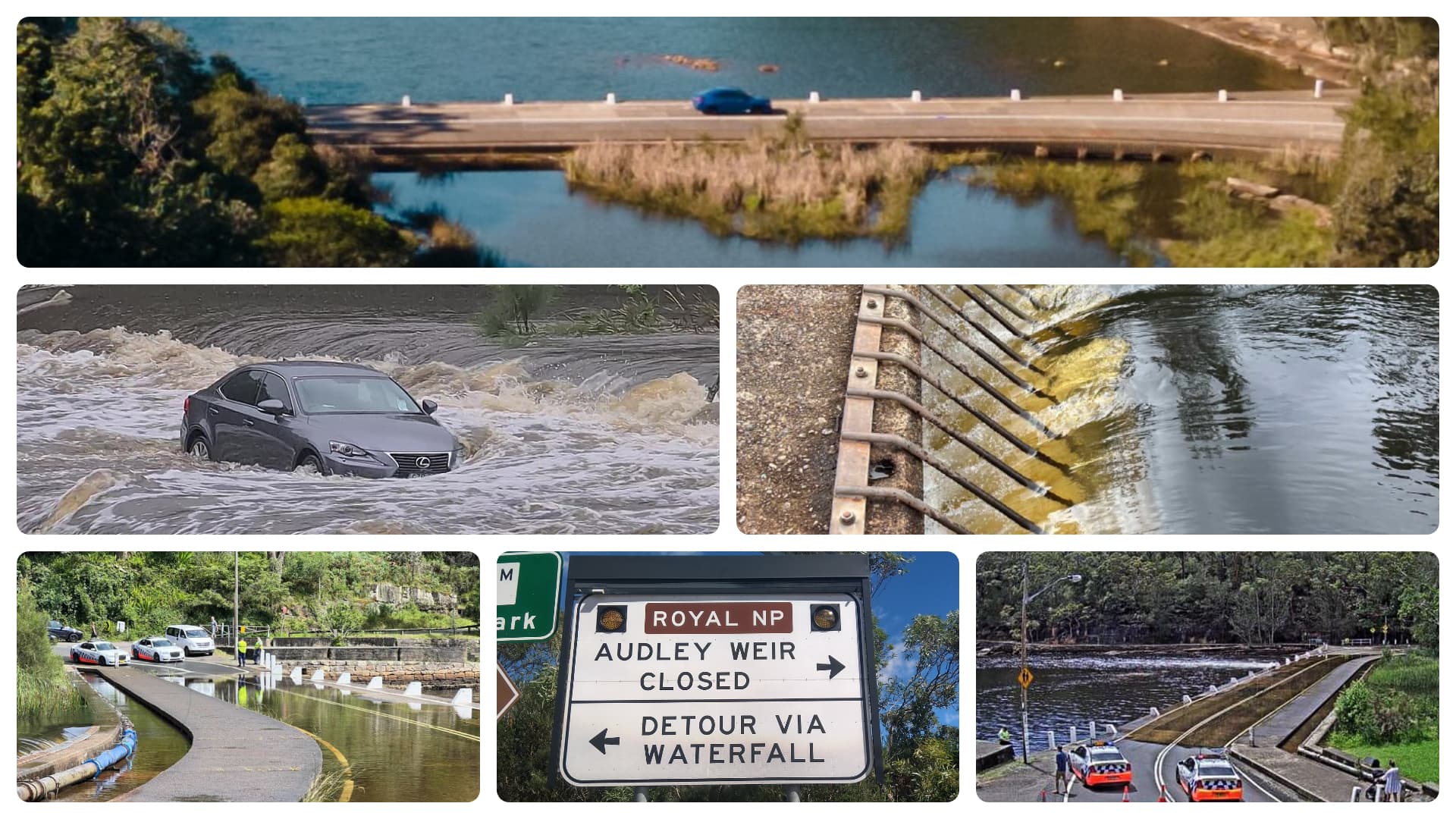 Concerns have been raised around the management of Audley Weir.

Is the Weir Open?

After any heavy rainfall the most asked question in Bundeena Maianbar is: Is the weir open? Residents setting out for the day need to know if they have to allocate an additional 45 minutes for the return journey from the townships to the rest of Sydney. If the weir is closed the extra time is needed to take The Long Way through the Royal National Park via the Waterfall entrance/exit instead of the normal entrance/exit located at Farnell Ave.

The cost to residents is not just in time but also in extra petrol costs along with vehicle wear and driving stress from the toll of the extra kilometres.

Finding out if the weir has flooded has improved greatly over time.  In pre-internet days there was no easy way to find out before leaving home if the weir was open. If one was lucky a family member or friend may phone them at home and warn them to take The Long Way.

Without any advance warning drivers would have to drive to the intersection of Bundeena Drive and Sir Bertram Stevens Drive and check if the detour sign was up indicating a weir closure. However, if the weir had only flooded recently before the detour signs were up drivers would make the regrettable right turn. This would involve driving for 10km before having to double back from the flooded weir for another 10km.  This could turn a normal 25 minute drive into an unexpected one hour one.

Fast forward to 2022 and now we have mobile and high speed internet, monitoring websites and apps along with a remote camera as well! Now residents can check the status of the weir themselves from a mobile phone regardless of where they are located at the time.

Is the Weir Really Open?

However, even with all the technological  advancements residents are still encountering frustrations on finding out the status of Audley weir. Although Transport for NSW (TfNSW), who determines if the weir road stays open or closed, can remotely monitor the flooding status they have not been consistently prompt on updating road signage or the Live Traffic website.

A recent example was on  10 December 2021. Officially the weir was not closed till 11 December 2:21am. However, several residents reported the weir was flooded by the early evening of 10 December. Drivers were caught off guard by the lack of warning and poor visibility with many being met with an unexpected wall of water as they drove across the weir.

In another example on 13 January 2022, road signage at Sir Bertram Stevens Drive was up early morning indicating the weir was closed. However, later in the afternoon several residents reported the same signage no longer indicated closure with many making the regrettable right turn to find out the weir was still indeed flooded.

The road was officially reopened 14 January at 8:10pm. However, drivers reported at early morning of 15 January the road signage at Sir Bertram Stevens Drive was still indicating the weir was still closed.  As a result many drove round The Long Way when it was unnecessary.

Another source of frustration is the weir being closed even if only a shallow puddle covers the road. This was the case on 8 January 2022. With two police vehicles blocking the weir entrance drivers dared not cross for fear of fine.

These type of closures in addition to inconveniencing residents also ties up scarce police resources as well as potentially impacting emergency response times for ambulance and firefighting services. The closures also have an economic impact on the  businesses which operate in the Royal National Park as well as in Bundeena Maianbar.

The other significant factor which can affect flood closure is the water retaining boards which prevent water passing through the weir. The boards are purposely left in to allow water levels to remain high for the nearby Audley Boatshed.  The boatshed hires out kayaks and rowboats and the water level needs to be maintained at a sufficient height to make paddling viable.

The retaining boards are removable and for 35 years up until 2021 these were managed by the Audley Boatshed operator. If water levels were getting too high the boards would be removed to allow the water to pass through quicker and thus preventing  road flooding.  While this board management would not prevent all flooding events it would minimise the number of them.

In 2021 Audley Boatshed had a major makeover which was completed in September of the same year. During the renovations the Boatshed was closed and the boards had been removed. Coincidently, even though Australia was experiencing a La Niña weather pattern with increased rainfall only one weir flooding closure occurred up until December 2021 when the boards were reinserted.

National Parks & Wildlife Services (NPWS) put out to tender for a new lease for the Boatshed’s operation.  The previous operator whose family had run it for 35 years did not take up the lease and it was taken up by a new operator. However, the new lease terms don’t account for the management of the weir boards. NPWS has indicated the responsibility of the boards belongs to Transport for NSW who manage road infrastructure.

Weir to from here?

In the short term NPWS and TfNSW need to resolve the management of the weir boards to minimise flooding events.

For the long term other options could be considered to minimise operational efforts and flooding events. The build up of vegetation alongside the weir could be reduced to increase water flow. This would need to take into consideration any ecological impacts.

Automated tilting weirs are now available which could automatically balance the water levels between two bodies of water. This would eliminate the need for the boards and their management while still allowing the Boatshed to operate.

Raising the weir has also been a solution touted by many. The road running over the weir would be raised to a sufficient level that flooding would be eliminated or become a rare event. While considered by some as a simple solution the road engineering involved may not be as trivial as thought. This could explain why this solution was not opted for when the Joan Holland Bridge running over the Waterfall weir was built instead during the 1990s.

Another simpler option is for a small alternate bridge to be built over Kangaroo Creek near the western end of Allambie Flat Picnic Area. A short access road less than 200 metres on the other side of the creek could connect it to the existing Varneys Bridge which runs over the Hacking River. This option would bypass Audley Weir all together. To minimise traffic congestion and maintain the ambience of the Audley area this alternate bridge could only be open when Audley Weir floods.